According to the FBI, a motor vehicle is stolen every 25 seconds in the USA, and fewer than 50 percent of those stolen cars are ever recovered. Where do they all go? Is there a big closet filled with stolen cars somewhere? Or do they go to that secret part of the clothes dryer that also hides individual socks? No, many of them end up back on the street, but under an assumed Vehicle Identification Number (VIN). END_OF_DOCUMENT_TOKEN_TO_BE_REPLACED

Are Certified Used Cars For You?

If you have been considering buying a used car with auto manufacturer certification, you’re not alone.   The programs have grown in prominence, and they have been the subject of both a study and an awards program by IntelliChoice, an auto cost-analysis research firm.

So who offers the best program? For the fourth year in a row, Jaguar was selected as the best Luxury program and Volkswagen received its first recognition as best Non-Luxury program. The winners are featured in the fall issue of IntelliChoice Magazine can be found online at IntelliChoice.com. END_OF_DOCUMENT_TOKEN_TO_BE_REPLACED

Cars Lasting Longer Than Ever 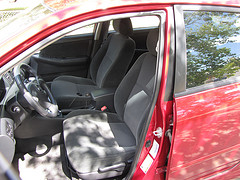 If you think today’s cars are built better than those in the good old days, it isn’t just your imagination.   According to R. L. Polk & Co., the automotive data provider that tracks such things, current vehicles are less likely to go to the junk heap than ever. In 2005,  just 4.3% of total passenger cars and trucks were scrapped, and this overall motor vehicle scrappage rate represents a historic low, besting a mark set in 1949 when a slow startup of auto production after World War II meant new cars were hard to come by.

Another indication that cars are lasting longer is the increasing median age of U.S. vehicles, which has increased across all major vehicle categories.   Median car age  END_OF_DOCUMENT_TOKEN_TO_BE_REPLACED

What Makes A “Certified” Used Car?

Used cars were once the province of the somewhat shady lot on the corner lit with the bare electric bulbs, populated by guys and, rarely, gales, in bad suits. Consumers who bought from such locations knew they were taking a risk and they lived with it.

But that was then. Today, used vehicles are big business, and giant, publicly traded corporations and the vehicle manufacturers themselves are playing in what has become a much more competitive game. One of the many results of this intense competitive pressure is the phenomenon known as the Certified Pre-Owned vehicle or CPO car. Some have heralded the Certified Pre-Owned END_OF_DOCUMENT_TOKEN_TO_BE_REPLACED

How To Find The Right Used Car

There has never been a better time to buy a used vehicle than right now.   It’s true!   Previously owned vehicles last longer, are built better, and deliver more reliable service than ever in history. And many used vehicles can now be purchased with warranty and roadside assistance coverage, something that was unheard of in the day of buying a used vehicle “as is.”   But, while used-vehicle bargains are out there in vast numbers, choosing just the right one for you is still fraught with several challenges.   Making a bad buy can haunt you — and perhaps your credit — for years down the road.   Before purchasing a used vehicle, it’s essential to find out as much as you can about the vehicle’s maintenance history and any mechanical problems it might be hiding. END_OF_DOCUMENT_TOKEN_TO_BE_REPLACED