Risks are higher for teenage drivers with teen passengers, and new research points to behaviors that are increasing the risks.

When teenagers drive with peers in their vehicles, they drive faster than other motorists and leave less distance between themselves and the vehicles in front of them. They more frequently engage in other risky behaviors like speeding. These are the findings of a recent study by researchers at the National Institutes of Health and Westat.

In light traffic with longer distances between vehicles, drivers of all ages increased their speeds – and teenagers increased them more than older drivers. Exceeding the speed limit by more than 15 mph was significantly more likely when male passengers were traveling with a teenager at the wheel. About 1 of every 4 teenage drivers with males in their vehicles drove this fast compared with about 1 in 20 teenage drivers who were traveling alone or with a female passenger. 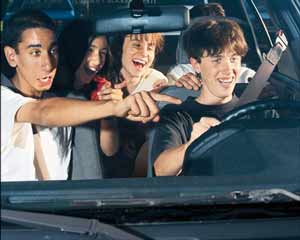 Teenage drivers of both genders maintained shorter headways, or distances to the vehicles in front of them, compared with other drivers. Headways didn’t vary much according to whether the teen driver was male or female, but headways did become shorter with male passengers in the vehicles. When the passenger was female, the headways were longer than when driving alone or when the passenger was a male. The longest headways were maintained by female drivers with female passengers.

“Crash rates are much higher when teenagers travel together, and this new study sheds light on some of the reasons,” says Institute senior vice president for research Susan Ferguson. Evidence from an Institute study indicates that when teen passengers ride with teen drivers their crash rates, including fatal crash rates, go up (see Status Report, Dec. 4, 1999; on the web at iihs.org). This is especially true when the passengers are males. The more passengers the greater the risks.

In 2004 a little more than half of all crash deaths involving 16-year-old drivers occurred when they had teen passengers in their vehicles.

Lead author of the new study, Bruce Simons-Morton, notes that “peers in vehicles, especially males, not only can distract teen drivers but also may encourage them to take more risks than they ordinarily would–risks like driving faster and closer to the cars in front of them.”

The researchers collected the data for the study at 13 sites on roads near 10 different public schools in the Washington, D.C., metropolitan area. Teams of 3 observers worked together during after-school hours. One observer estimated the ages and genders of the drivers and passengers leaving school parking lots and recorded the types and colors of their vehicles. The other two observers captured the vehicles on videotape, one from across the street and the other from a nearby road.

“Observed effects of teenage passengers on the risky driving behavior of teenage drivers” by B. Simons-Morton et al. is published in Accident Analysis & Prevention 37 (2005).