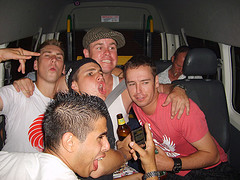 “We know that adults can’t always persuade teens to do what’s best for them even if it will save their lives,” said Len Hunt, vice president in charge of the Volkswagen brand. “Sometimes peer pressure is more persuasive, which is why we decided to let teens convince other teens that buckling up is the thing to do.”

As part of a contest sponsored by Volkswagen, high school students from across the nation were challenged to create and produce 30-second television public service announcements (PSAs) to convince their peers to buckle up. The task of convincing teens is daunting. Statistics show that young people are four times less likely than adults to wear safety belts when driving or riding in a car. Even more alarming is that auto crashes are the number one killer of teenagers in this country, and two-thirds of those are not wearing seat belts at the time of the crash.

The television spots were produced as part of Fasten Your Seat Belt … Go Far!, a national safety belt education program and contest, created by Volkswagen of America, and administered by Scholastic Marketing Partners, the global children’s media and publishing company.

The U.S. Department of Transportation (U.S. DOT) recently released new data showing 2003 as having the lowest fatality rate in 30 years. Still, there is much to be done: 56 percent of those killed in auto crashes are not wearing safety belts.