When the discussion turns to the Chrysler Airflow, the sum of the  talk  is normally: early attempt at streamlining that the public didn’t like. 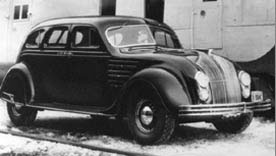 In others words, nice attempt; call us again when you have a winner.

This thumbnail model considerably under-rates the importance of the Airflow because, despite its commercial failure, Chrysler’s brave  trial  at innovation may well have been the most important vehicle of the 1930’s. Not only did the Airflow lead the way in terms of aerodynamics (or “streamlining” as it was then named), it was the first mass-market car in the world to use the “modern” architecture that has now become the benchmark.

The man, Walter P. Chrysler was an American “automobile man.” A promoter with a genius for
marketing, he built  an odd lot of automobile companies, including Maxwell and Dodge Brothers, and by 1930 he had himself a somewhat smaller version of General Motors. He offered consumers a variety of  models  at a variety of prices, and, though his brands weren’t market leaders, they were credible  rivals.  For example, at the top of the line,  the Chrysler Imperial was in a league with Marmon, Packard, Cadillac,  and Stutz, taking a back seat only to the Duesenberg J.

Chrysler’s success was based on a simple principle: staying in touch with the market. Its various divisions provided competitive cars at competitive prices in their individual segments. Neither wildly good nor abysmally bad, they provided reasonable value.

But Chrysler also enjoyed having a status as an innovator. He first made his name in the industry by pioneering 4-wheel brakes in the United States in the 1920’s, and,  instead of being dictatorial, he encouraged his engineers to examine new and better ways of doing things.

Carl Breer was one of his engineers who did just that. One evening while at the wheel of his car, he  observed the similarity between the contour  of then-current airplanes and that of birds, and began musing how archaic car design was in comparison. In the late Twenties, majority  automotive designs could be characterized as one box stacked on another. All the car’s equipment- bumpers, lights, horn,  spare tire–were hung somewhere on the two boxes and allowed to wave in the breeze.

Simply  from eyeballing some airplanes, Breer intuitively got the impression that taking  the same approach to automotive design could result in some real benefits. He contacted a Dayton, Ohio-based engineer named Bill Earnshaw, who in turn contacted Orville Wright, the co-inventor of the airplane,  and before long they were testing shapes in a small wind tunnel. Seeing the progress was being made, Breer then authorized the construction of a bigger wind tunnel at Chrysler’s Highland Park, Michigan, research center with the full support of no less than Walter P. Chrysler.

One of Breer’s earliest and most startling discoveries  was that the traditional sedan of that era (circa 1930) was actually more aerodynamically efficient traveling in reverse than moving forward. The reason for this was the sudden, nearly vertical tail of then-current automobiles, which created turbulence and a partial vacuum that acted as an invisible anchor.

To remedy this, a sloping or tapered tail was much preferable to the contemporary practice, which is why avant garde exercises like Buckminster Fuller’s Dymaxion and William B. Stout’s Scarab  had pronounced teardrop shapes with the “big end” of the teardrop in front. These two vehicles packaged their passengers in a somewhat  blunt forward section of the vehicle and put the engine in a tapering tail. To a rather lesser extent, the production Tatra 77 did the same thing.

Moving the passenger compartment forward, of course,  necessitated some other changes. Because Chryslers were powered by a heavy straight eight engine, moving the passengers forward meant moving the engine forward as well. While the huge majority of cars in the Twenties and Thirties positioned their engines well behind the front axle, in the Airflow part of the engine actually extended ahead of the front axle, even though the majority of the engine’s mass still lay behind it. Though radical at the time, this, too, has become traditional practice.

A final pioneering advance of the Airflow was its distinct  frame. Instead of a simple “ladder” of girders and beams  that characterized most chassis construction of the time, the Airflow used a “space-frame” not unlike the best contemporary aeronautic practice. Where practically  all automotive bodies of the early Thirties were separate structures that were connected to the frame, the Airflow’s frame ran up the fender line, across the cowl and encircled the door openings. In many ways,  it was very similar to the construction method used on today’s Saturn automobiles wherein  the body panels are hung from the chassis, and it anticipated so-called unit-construction that is ubiquitous  nowadays.

As an added fillip several of the body  parts were more or less interchangeable. For instance, the stamping for the right front door was very similar to the left rear. This made for some production efficiencies, when Chrysler gave the okay  to carry on.

Though far from beautiful, the final  Airflow design that was conceived by Breer, engineering director Oliver Clark, and a team that included Owen Skelton and  Fred Zeder, was a revelation. Unveiled at the 1934 New York auto show, the Airflow, which was offered in both De Soto and Chrysler  versions, stopped traffic and generated tens of thousands of inquiries.  Unfortunately, though, no production versions were ready for delivery, and by the time they were, negative buzz was all around.

Some said Chrysler’s  rivals started a whispering campaign about the Airflows; others believe that the teething concerns  the first cars experienced muddied the Airflow’s reputation; still others will tell you that while the concept behind the Airflow was good, it’s execution was just plain ugly. For whatever reason, the market  shied away from the new-as-tomorrow car.

Chrysler hedged its bets on the launch by continuing to provide conventionally engineered and styled  models concurrently, but De Soto, which was Airflow only, saw its sales drop by 47 percent. Chrysler executives immediately reacted by ordering a fast re-modelling of the Airflow, but, to their credit, they kept the model in production through the 1937 model year.

Though history records the Airflow a failure, the pioneering work done by Breer and his intrepid staff of engineers has lived long past the model’s untimely death and is a silent but crucial part of every car we drive today.