Mercury has always existed in a Never-Never Land  inside Ford Motor Company. The brand was established in 1939 to fill the huge gap that existed between the luxury Lincoln and the popular-priced Ford, but for some reason, in the 60-plus years, the product has been in existence, Ford execs have been unable to give it a strong identity.

Certainly, the mid-priced brands from General Motors —  Oldsmobile, Pontiac, and Buick — and Chrysler’s Dodge division have always had better-defined personas than Mercury, and that has always been to Mercury’s disadvantage. It seems that over the course of its history, Mercury has wavered from being just a tarted-up Ford to a near-Lincoln, which has made it improbable for the buying public to pin down. Of course, in the clutter of the American car market, if a brand has a puzzled image, it really has no image at all. 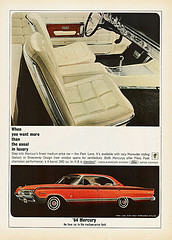 Though Ford Motor Company has never been able to stick an image on the Mercury brand, it has tried strongly at times. In the go-go Sixties, when muscle cars were the rage and NASCAR stockers actually bore a reasonably close similarity to cars you could buy in a showroom, Ford executives decided to slant the brand toward performance, and that led directly to the presentation of the Mercury Marauder. But, true to form, the birth and life of the Marauder was filled with  mixed messages and confusion. One thing that was clear was that in 1963, Bill Stroppe,   who would later become a big name in off-road racing, was charged with taking Mercury back to stock car racing. He was given a big budget, persuaded to hire big-name drivers like Parnelli Jones and in general told to “go for it.” So he did, and Jones, driving a car called the Mercury Marauder, became a force on the circuit in 1963 and captured eight major stock car wins in 1964. He also took stock-car division triumphs both years at the prestigious Pikes Peak hillclimb. Accompanying the racing Mercury Marauder came a Marauder sub-series of the full-size ’63 Mercury, which, rumor has it, was originally  intended to be the 1964 Ford. (This was obviously not the first time that Ford Motor Company execs had switched nameplates from Ford to Mercury, and it is emblematic of the confusion surrounding the brand.) Capitalizing on the Marauder race wins, the original Marauder version was a two-door hardtop with a conventional backlight. At the same time, Mercurys were accessible with the reverse-slanting Breezeway backlight that could be lowered for ventilation.

A multitude of distinctions

By the beginning of the 1964 model year, things grew more intricate. The Marauder trim and several Marauder engine choices were made available on all three full-size Mercury versions, so you could buy  a Mercury Montclair Marauder, a Mercury Monterey Marauder, or a Mercury Park Lane Marauder, each with a checkered flag on the fender. The engine options, though all V-8s, were varied as well. The stock-car racing Marauder was equipped with a 410-horsepower version of the Ford 427 big-block, but few street cars got this highly expensive and  highly complicated  engine. The vast majority, instead,  were equipped with the Marauder Interceptor 390 V-8, which offered 330 horsepower or  the Marauder Super 390 V-8, which delivered 300 horsepower. The big-block 390 cubic-inch engine was relentlessly traditional. In Interceptor form, the overhead valve V-8 was equipped with mechanical lifters and a big four-barrel carburetor. With 10:1 compression, it not only churned out 330 horsepower at 5,000 rpm, but also a wheel-spinning 427 pound-feet of torque at a leisurely 3,200 rpm. The Marauder models could be furnished with a three-speed manual transmission, a four-speed manual,  a three-speed plus overdrive manual, and a three-speed Merc-O-Matic automatic transmission. Unfortunately for performance, the big horsepower and torque numbers were squared off against a very weighty car.

A Montclair Marauder normally tipped the scales at 4,500 pounds or so, with commensurate effects on 0-60 mph and quarter-mile times. Suffice it to say that it would be not wise to face off a Marauder-equipped Mercury versus the smaller Pontiac GTO of the same year. A fairer opponent would be a Catalina or a Pontiac Bonneville.

The Mercury in Marauder trim was also a huge car. Its detached body sat on a 120-inch wheelbase and was more than 215 inches long. The steel casing was a ladder-type with five cross-members and boxed side rails. Without a doubt it was solid, but it was also heavy. While a hard chassis can be an invaluable aid to handling, the Marauder’s rudimentary suspension was designed for  straight-line tracking and ride comfort, not cornering.  It featured an independent ball-joint front suspension using upper and lower wishbones,  coil springs,  and tube shocks, and it was affixed with an anti-roll bar. The rear suspension was even more primitive with live axle,  tube shocks and semi-elliptic leaf springs. The 8-inch x 14-inch tires and 11-inch cast-iron drum brakes were right in tune with the rest of the design, definitely competitive with other cars of its ilk but not state-of-the-art. Certainly the most stunning of the Mercury Marauders was the two-door hardtop; but then again, “stunning” is a relative term. One of the most prominent elements of the design is the huge rear overhang,  providing the car a deck length approximately equal to its hood length. Though great for trunk space, the huge overhang was ungainly.  The Marauders, at least, did not feature the oddball Breezeway roofline. Instead, the simply drawn roofline of the Marauder is one of the best-looking pieces of the pattern. The front end offered a quad headlights, full-width outwardly V’ed grille,  and a massive chrome bumper. The rear was more attractive with  a trio of taillights on each side, vestigial tailfins, and a bumper that meant business. Inside, the Marauder’s instrumentation featured live, real gauges for many functions, instead of idiot lights — a big plus. The panel was also tremendously busy and seemed to exhibit some GM influence. While bucket seats were available, many Marauder clients chose to avail themselves of sofa-like front bench seats. The big doors on the two-door model were festooned with  vent cranks, chrome window and vent cranks and an easily grasped door handle integrated with the armrest. While no one will declare the Mercury Marauder was the best muscle car of its time, it was a stout performer that put a bit of steel in the Mercury brand image. Though, sadly, by the mid-Seventies, the performance image that had been forged by the brand had been all but erased, and as this is being written, Ford executives are still battling with what to do about Mercury. Again, the brand’s continued existence seems at stake.