So just what the heck is a “crossover”? Not only is it among the hottest vehicle types in a decidedly not-so-hot market this year, but it is also essentially a cross between an SUV and a car. More accurately, it is a high-profile vehicle that looks and behaves much like a sport-utility vehicle but is based on a car platform rather than a truck platform. Though nobody in the industry talks about the crossover craze the way they did about the SUV craze of the ’90s, the new vehicle type has proven to be among the most popular of the decade. 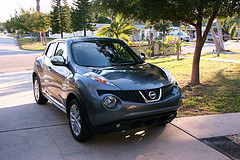 Perhaps the biggest reason for the success of the crossover segment over other segments is that there are just so many of them in all shapes and sizes and seemingly daily more are being introduced. Crossovers are also appealing to a wide range of buyers because they offer much of the versatility of an SUV but the way they ride, handle and offer fuel economy is much more analogous to a sedan. In addition, their taller profile makes them easier to get in and out of than a conventional sedan, and many people like their upright seating.

These days, because of the soft automotive market, another thing people like about them is their affordable prices. Very often, these vehicles are discounted by several thousands of dollars versus MSRP, and they are usually less expensive than equivalent traditional SUVs. The “deals” take a number of forms: a combination of factory-to-customer cash, factory-to-dealer cash and special financing offers. Some great lease deals are also available on crossovers right now.

Sound appealing? Here are some crossovers worthy of your attention. To check photos and prices, click the name of the car.

Volvo XC60 This is touted as the safest Volvo of all time, and that’s really saying something. Beyond that, it might also be the best-looking Volvo of all time, with impressive exterior and interior style that transcends the stolid Volvo image.

Chevrolet Traverse Based on the same platform as the Buick Enclave, the Traverse does many of the same things as the Enclave but at a much lower price. It is well-built and a great alternative to pricier crossovers in its size class.

Acura MDX One of the most popular luxury crossovers, the MDX combines a future-look exterior with abundant space and a sport-sedan level of handling and performance. Some might be turned off by its looks, but the technology under the skin is stellar.

Buick Enclave Luxury, style and quality from an American-based manufacturer? It’s all there in the Buick Enclave. This is an easy-riding vehicle that looks great, and it offers a wide variety of luxury amenities.

Toyota Venza The Venza has moved the crossover even closer to the sedan than many of its brethren, and it virtually eschews any semblance of off-road capability. In the old days, we would have called the highly styled Venza a station wagon.

Honda CR-V One of the granddaddies of all crossovers, the small CR-V was originally introduced as an SUV, but it offers all the advantages of the typical crossover in terms of ride, handling and fuel economy. It has grown more sophisticated through the years, but it’s still a bargain.

Porsche Cayenne The Cayenne doesn’t hold all that many people or that much stuff, it’s not economical to purchase and its fuel economy is nothing to text home about. But of all the crossovers, it might well be the most fun to drive. Especially if you like driving fast and with plenty of emissions. And interestingly, it offers serious off-road capabilities in addition to its top-notch on-road abilities.

What’s YOUR Opinion of These Cars?
Add Your COMMENT Below Now!

—Driving Today Contributing Editor Tom Ripley writes about the automobile industry and the human condition from his home in Villeperce, France. © Studio One Networks.