The Battle For Interior Space

Since many commuters feel like they live in their cars these days, they are seeking home-like conveniences and entertainment options. And the consumer electronics companies are more than ready to accommodate them. There’s only one problem–space. In most cars and SUVs, there’s just not enough room for all the electronic gizmos that could be offered, so there is a silent battle going on, the battle for interior room, not for people, but for their electronics.

From telematics to back-seat entertainment systems, the vehicle is fast becoming a mobile media center on wheels capable of managing content and information for entertainment, productivity, and safety. According to Telematics Research Group (TRG), DVD-entertainment systems, in-vehicle phones, navigation systems and satellite radios are bright spots in a growing field. TRG predicts the installation rate for many of these systems to approach 50 percent of global vehicle sales by the end of the decade.

Premium audio systems are leading this trend, but other devices are quickly coming into the picture. Global Positioning Satellite (GPS) navigation systems, portable media players like iPods, Bluetooth phone kits, and vehicle tracking systems are rapidly becoming available from both the automakers and aftermarket suppliers.

“The automotive industry is putting more resources into the design of the interior,” says Phil Magney, president and principal analyst of TRG. “OEMs are optimizing this space for entertainment systems with components matched to meet the acoustic properties of the vehicle. And to better handle the flow of content within the vehicle, automakers have begun using fiber optic networks to better distribute large amounts of digital content.”

The major auto manufacturers sell branded audio components with multifunction capabilities. The latest high-end systems from Acura, DaimlerChrysler, BMW, and Toyota have built-in Bluetooth with their audio and navigation “head” units (the primary electronic brain of each device.) Thinking further out of the box are BMW and Smart who offer consumers an interface to their Apple iPods. 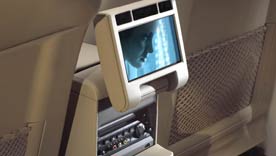 One of the hottest categories is in-vehicle kits that facilitate hands-free use of cell phones while driving. Using Bluetooth and/or docking stations, these devices also include voice recognition and many play through the vehicle’s audio system. This trend is being stimulated by new regulations that prohibit the use of hand-held cell phones while driving in some states (in spite of the evidence that the distraction problem is the conversation, not using one’s hands).

In the future are devices that will immediately synchronize with your in-home computer and entertainment systems. That way if you have a song or movie saved on your computer at home, it can immediately become available in your car, minivan, or SUV.

—Driving Today contributor Tom Ripley is based in Villefranche, France, where he reports on the automotive industry and the human condition.© Studio One Networks.