Ten years ago futurists predicted that the Internet would completely change the way consumers shop for goods. While that revolution never gained the strength that was predicted, there is no doubt that the Internet has altered the way people shop for big ticket goods, and the most obvious example is in the category of automobiles.

While the number of consumers visiting automotive web sites during the new- and used-vehicle shopping process has grown modestly in the last couple of years, the impact the Internet is having on buying decisions has increased significantly, according to the lastest J.D. Power and Associates 2003 New Autoshopper.com study.

While most consumers still go into retail stores to buy groceries and prescription drugs, the Internet has gained substantial importance with car buyers. The J.D. Power study found that nearly one-half (49 percent) of new-vehicle buyers say the Internet impacted their make/model purchase decision–up from 40 percent in 2002. Furthermore, 24 percent of buyers say the Internet had a “big impact” on their make/model choice–up from 16 percent a year ago. The Internet also had a reported effect on the price consumers paid for their new vehicles among 49 percent of buyers–up from 41 percent in 2002.

“The dynamic surge in the percentage of buyers indicating the Internet had a big impact in their make/model selection and the price paid reflects the increased experience and comfort new-vehicle buyers have with the medium and how much value they see in the information available to them,” said Dennis Galbraith, senior director of automotive web site research at J.D. Power and Associates.

Though many Internet car shoppers say they surf to save time, the average web user doesn’t seem to skimp on the time they spend doing online research. The study said that, on average, automotive Internet users spend a total of five hours online shopping for their new vehicle. It’s also clear that Net surfers do a great deal of research early in the process, separating the wheat from the chaff, before they go to new-car dealerships. Some 89 percent said they conduct online research before actually visiting a showroom. 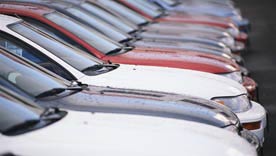 Where do they conduct their research? Most seem to use a combination of car manufacturer and independent sites. The study found that 83 percent of automotive Internet users visit at least one manufacturer web site during the shopping process, compared to 79 percent who visit an independent site. Unfortunately, many who visit independent sites run by car dealers might not be getting all the information they want. Other J.D. Power and Associates research shows that while 90 percent of auto dealerships report having web sites, 31 percent of those with a site do not post vehicle inventory, a feature highly desired by consumers.

“As the volume of leads that dealerships receive from the Internet continues to multiply, dealers must understand that the online lead is not merely a pivot point from Internet to showroom,” said Galbraith. “Many of today’s buyers are savvy shoppers with advanced Internet navigation and communication skills. Dealers who approach online leads with a strategy of withholding information in an effort to lure shoppers into the showroom may prompt shoppers to simply find another dealership willing to provide online price quotes or inventory information.”

Perhaps because of this phenomenon, only 20 percent of buyers purchase their new vehicle from a dealer whose web site they visited. When more detailed information, like vehicle inventory, is posted on dealer web sites, that figure is expected to rise.

Overall, a substantial majority of American car buyers now use the Internet as part of the car-buying experience. In the past year the percentage of new-vehicle buyers who use the Internet for automotive shopping rose to 64 percent, up from a two-year plateau of 60 percent in 2001 and 2002. Kelley Blue Book (kbb.com), Edmunds.com and ConsumerReports.org are among the most visited independent automotive web sites.

The 2003 New Autoshopper.com study is based on responses from 30,352 consumers who leased or purchased a new vehicle registered in January or February 2003.