Thirteen vehicles earn the Institute’s  TOP SAFETY PICK award for 2007. The winners include four cars, seven SUVs, and two minivans.  This award recognizes vehicles that do the best job of protecting people in front, side, and rear crashes based on ratings in Institute tests. 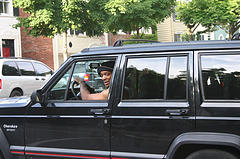 Winners also have to be equipped with electronic stability control (ESC).  Vehicles eligible to win are  current small, midsize, and large car models plus minivans and small and midsize SUVs.    Pickup trucks aren’t included in this round of awards because the Institute hasn’t begun to evaluate their side crash worthiness.   This is the second year of the awards (see Status Report, Dec. 17, 2005; on the web at iihs.org).   “Our crash tests cover the most common kinds of real-world collisions,” says Institute president Adrian Lund. “Designating TOP SAFETY PICK winners based on the tests makes it easier for consumers to identify vehicles that afford the best PICK 2007 WINNERS overall protection without sifting through multiple sets of comparative test results.