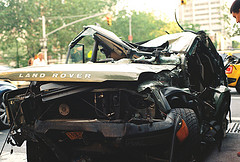 For the first time ever, the Institute has chosen 10 cars, all 2006 models, that win Top Safety Pick awards. The awards recognize car designs that afford the best protection for people in front, side, and rear crashes, based on performance in Institute tests. The winning vehicles were chosen from among current models of small, midsize, and large cars plus minivans. There’s a winner in three of these four groups. The winners include two large car designs, seven midsize, and one small car. No current minivan designs meet the Institute’s criteria to earn a Top Safety Pick award. Pickups and SUVs weren’t included in this round of awards because side impact tests of most of these vehicles haven’t been conducted yet.

“Now that we’re rating vehicles’ front, side, and rear crashworthiness, based on test performance, we decided to give consumers an overall assessment based on all three tests. These Top Safety Picks are replacing our previous ‘best pick’ designations that were awarded separately for front and side crash test performance,” Institute president Brian O’Neill explains.

“The new awards mean that consumers can compare cars’ ratings more quickly and easily. They won’t have to review multiple sets of tests results separately. And when we test new car designs as they are being introduced next year, it’s possible that some models will be added to this group of 2006 Top Safety Pick winners.”