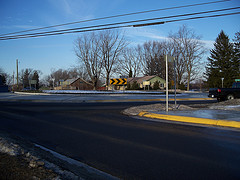 When traffic engineers plan the roads that eventually will accommodate traffic in new developments like this, the plans usually involve intersections with stop signs or signal lights. But the barren site of a future intersection might be an opportunity to consider another option for traffic  management, the modern roundabout. These have been built by the tens of thousands worldwide. The main benefits have been to improve traffic flow and reduce injury crashes by as much as 75 percent compared with intersections controlled by stop lights or signs (see Status Report, May 13, 2000; on the web at www.iihs.org).   But only  have been built in the United States.

“Transportation engineers, like everybody else, generally go with what they’re used to, and what they’re  used to on U.S. roads is constructing standard four-way intersections equipped with stop signs or signal  lights. Doing this means missing the benefits of roundabouts, so we’d like to encourage officials to  consider roundabouts earlier and more often in the roadway planning process,” says Richard Retting, the Institute’s senior transportation engineer and author of two new studies that suggest how to overcome traditional impediments to building roundabouts.