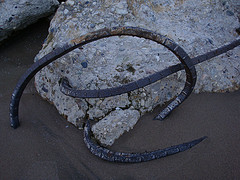 Sure, we all see a lot of stuff in the middle of the road, including the occasional dead skunk, but did you know that all this detritus actually results in thousands of automobile accident each year? According to new research released by the AAA Foundation for Traffic Safety, vehicle parts, cargo, or other material that has been unintentionally discharged from vehicles onto the roadway is estimated to cause over 25,000 crashes per year in North America, and those crashes, in turn, result in approximately 80-90 fatalities.

“Although vehicle-related road debris (VRRD) crashes are generally less severe than other crashes, individual incidents can be catastrophic,” says Peter Kissinger, president and CEO of the AAA Foundation for Traffic Safety. “Moreover, many of the estimated 25,000 VRRD crashes can be prevented if truckers and motorists secure their loads properly and report debris that they encounter on the road.”

“The Safety Impact of Vehicle Related-Road Debris” estimated the magnitude of the VRRD safety problem (e.g. frequency and severity of VRRD crashes). Intus Road Safety Engineering, Inc. conducted the research through an extensive literature review, identification and analysis of existing crash data, as well as surveys of current state and provincial practices for preventing and removing VRRD.

A survey of road authorities in the U.S. and Canada on maintenance practices found the three most prevalent forms of road debris include tire treads, garbage from waste haulers, and lumber and construction materials.

The report recommends several low-cost educational and enforcement approaches as potential countermeasures to prevent VRRD crashes and to reduce crash severity when they occur. One of them started with this article, namely, educating motorists on load securement and encouraging them to report unsafe vehicles, unsecured loads, and stuff in the road.