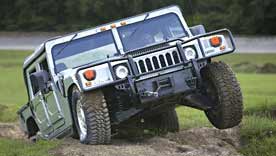 Further, those roots are planted intensely in the soil of solidly Midwest Indiana, where they can be traced back to 1903, when Standard Wheel Company, a Terre Haute bicycle manufacturer, decided to enter the infant automobile industry with the introduction of the Overland Runabout, its first motor vehicle.

While Overland is a well-known name to antique auto buffs, a household name became associated with the enterprise when John North Willys purchased it in 1908, the same year the Chicago Cubs repeated their 1907 triumph as World Series Champions. By 1912, the Willys-Overland Company was operating out of Toledo, Ohio, producing the popular Willys-Knight cars and the Whippet automobile later favored by the avant garde rock group Devo.

Willys-Overland went through bankruptcy in the Depression, but then emerged to continue building its highly-regarded, middle-class line of cars. In 1939, with war clouds gathering ominously over Europe, the U.S. Army sent out the call for a new military vehicle with a very detailed list of specifications: load capacity of 600 pounds,  dual range four-wheel drive, minimum of three-passenger seating and a gross vehicle weight of less than 1,200 pounds.

The Army  anticipated a sizable number of auto manufacturers to compete for the contract, but only three — American Bantam, Ford and Willys-Overland — genuinely participated. American Bantam submitted blueprints to the Army in less than a week after the call went out,  assisted by the fact that their American Bantam civilian models were nearly the same diminutive size as the vehicle the Army spelled out. With Ford and Willys-Overland somewhat slow in responding, the first contract for the as-yet-unnamed vehicle went to American Bantam. Unfortunately for the fortunes of that star-crossed company, however, the vehicles that it produced came up sadly short when tested by the Army.

Not willing to trust American Bantam to repair the problems, the Army issued a new call for prototypes, and Ford and Willys-Overland  both responded with vehicles to compete with the modified American Bantam. The Army conducted another series of trials, and this time the Willys version was deemed best. Willys-Overland got the agreement, and the legendary Jeep was born. Before production stopped, Willys-Overland manufactured over 360,000 of the utilitarian 4×4 vehicles.

After the war,  Willys-Overland decided to introduce a civilian model of the Jeep, and the CJ (Civilian Jeep) resulted from that stroke of genius. In 1953,  industrialist Henry J. Kaiser purchased Willys-Overland, and the name was consequently changed to Kaiser-Jeep Corporation. The company added operations in South Bend, Indiana, where the Hummer is built,  succeeding the acquisition of a contract from the defunct Studebaker Corporation to produce military trucks.

As Jeep was transitioning from a military vehicle to a long-standing civilian victory, the vehicle that would replace it — the High Mobility Multipurpose Wheeled Vehicle (HMMWV) — was rapidly developing in its wake. In 1979,  a new competition, not unlike that of 1939, started to develop a vehicle that meet a very exacting U.S. Army performance specification. This time, the combatants weren’t American Bantam, Ford and Willys-Overland, but General Dynamics, Teledyne and AM General,  instead.

After extensive evaluation, the Army awarded all three contending companies contracts for test vehicles, and within 10 months AM General delivered its HMMWV prototypes to the Army proving grounds. More testing followed, and the AM General vehicle was judged to be the superior technical offering. In March 1983, AM General was awarded what was to be the first of many production contracts, which called for 55,000 vehicles to be delivered to the U.S. Government over a period of five-years. By completion of the contract in 1989, opportunities had raised the number of vehicles to 70,000.

Known formally as the M998 Series, the first military Humvee was a 4×4, multi-purpose vehicle designed to provide superior mobility in a “tactical field environment,” i.e. warefare. It was mobile, versatile, and  fast  (at least relatively.) As a demonstration of its versatility, it functioned as a replacement for an assortment of vehicles, including the M151 (1/4-ton utility vehicle otherwise known as the Jeep,) the M274 (1/2-ton mule), the M561 (1-1/2-ton Gama Goat,) and the M880 pick-up truck. Rugged as the day is long, the HMMWV could make its way over rocky hills, through mud and deep sand, in desert heat,  in water up to 60 inches deep,  and Arctic cold.

While the Humvee was reaching legendary position with the American military, the company that built it went through another couple of ownership changes though continuing to produce what has become an unwavering vehicle of the U.S. military. Due in part to the HMMWV’s success in the Desert Storm operation to free Kuwait and the high-profile enthusiasm of actor and now-California Governor Arnold Schwarzenegger, AM General presented the civilian model of the vehicle called the Hummer in 1992.

When it was initially  introduced to the public,

critics  (including yours truly) praised it for its incredible off-road capabilities and for the presence it had on the road. At the same time, they decried its lack of speed,  interior noise, and lack of creature comforts, especially in light of its high cost. It seemed destined to stay as purely specialty vehicle, known by many but owned by few, until General Motors stepped into the fray in 1999. Spurred by the creation of a 4×4 concept vehicle that was dripping with Hummer characteristics, GM entered into a contract with AM General that gave the mighty auto maker absolute use of the Hummer brand name. GM immediately set about not only marketing the original Hummer, which it labeled H1, but also to expand new, more consumer-friendly Hummers including the mid-size H2, based on the Chevrolet Tahoe and the newly introduced H3, based on the Chevrolet Trailblazer.

At the same time, the original Hummer, while retaining its otherworldly off-road characteristics, has been tamed and refined for civilian use. The  interior finish, seats,  and instrument panel have all been re-done in a luxury mode, befitting the vehicle’s six-figure price tag. Under the hood, the 6500 6.5-liter, turbo-diesel V-8 engine now supplies 205 horsepower at 3200 rpm and nearly mind-boggling 440 pound-feet of torque at a mere 1800 rpm.

The H1’s four-wheel-drive features what’s  dubbed “TorqTrac 4 technology,” automatically reducing tire spin on slippery surfaces or severe terrain by applying the brake to the spinning wheel. Available front and rear Eaton ELocker locking differentials offer slow-speed capability in climbing over  long, steep grades,  or large rocks,  while the Central Tire Inflation System (CTIS) enables H1 owners to adjust tire pressure on the move to adapt to different terrain. That system is complemented by the Runflat Tire System, which permits drivers to continue driving on a deflated tire for up to 20 miles at 30 mph.

Ground clearance is an astonishing 16 inches, almost double that of any other civilian 4×4. And its off-road prowess is augmented by approach and departure angles of 72 degrees and 37.5 degrees, respectively, and the 17-inch aluminum wheels with 37-inch tires. Its driver might never feel the need to cross streams, but the present Hummer H1 can for a 30-inch-deep body of water, the kind you might find at the local home center. So like the Jeep before it, the Hummer has become a civilian victory after a proud military career.