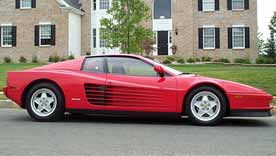 From the beginning,  the Testarossa was envisioned to appeal to the well-heeled by curing the perceived ills of 512 BB. Among these ills were a cabin that suffered heat-gain from the indoor plumbing that ran between the midships-mounted engine and the  the front-mounted radiator  and an absurd lack of luggage room.

The answer to both these problems was increased size. The answer to an uncomfortable amount of cabin heat was to mount twin radiators back with the engine instead of a single radiator up-front. That fix, in fact,  also opened up some forward room for luggage.) But the price to be paid was additional width to accommodate the air inlets placed behind the doors. At 77.8 inches, the Testarossa was almost half a foot broader than the Boxer.

To solve the luggage space issue, the wheelbase was stretched about 2 1/2 inches to 100.4 inches. Largely,  the addition went into the cabin in the form of storage behind the seats, though some carpeted storage was available under the front forward-opening hood. A Testarossa driver was still hard-pressed to find space for one hard-sided Samsonite, but he could stuff in several soft-sided bags.

Wrapping this all together was a contentious Pininfarina body. Of course, the most widely debated characteristic were the “cheese grater” side strakes that shot across the doors into the rear fenders. Designed to offer the necessary cooling air while integrating the openings into the overall concept of the car, the look soon spawned knock-off treatments that were slapped onto far lesser cars like Pontiac Trans Ams and a wide variety of Japanese sporty cars, one of the most deplorable trends of the decade. Though some detested the Testarossa’s strakes, overall they seemed to be a reasonable solution to the difficult problem of supplying air to the rear-mounted radiators. Aside from the strakes, the rest of the design was striking  if a bit overblown. The front egg crate non-grille (how could one call it a grille when it didn’t cover an air intake?) was echoed by a similar horizontal treatment at the rear, which was decorated with the prancing horse.   Vanished were the six round taillights of the 512 BB, replaced by rectangular lenses.

One has to give Pininfarina  recognition for bucking a trend and making the Testarossa’s roofline half an inch taller than the Boxer. This gave much-needed headroom to the passenger cabin. Pininfarina also gave the Testarossa an huge front overhang. In fact, the majority of the “hood” is overhang, while the base of the windshield begins  just aft of the front axle. The windshield itself is tremendously “fast” (read, nearly horizontal), and the backlight is a small , stand-up type similar to the 512 BB. The well-known five-spoke alloy wheels were one bow to Ferraris past.

The amended flat-12 engine was a bow to Ferraris fast. Racing had passed the flat-12 by, but there was no question that the configuration could still produce prodigious amounts of horsepower. With virtually identical compression and displacement ratio to the 512 BB, the key  changes in the Testarossa were the new four-valve cylinder heads that were, fittingly, finished in red. (Testa Rossa implying, of course, “red head.”) The new heads offered hugely better breathing than the previous two-valve-per-cylinder configuration.

That change, plus the addition of more modern engine controls, resulted in considerably more horsepower than the already stunning 512 BB. In Europe,  the Ferrari factory numbers were 390 horsepower at 6800 rpm and 362 pound-feet of torque at 4500 rpm. The early American-spec models offered 380 peak horsepower and just a slight drop in peak torque.

As with the Boxer, double wishbone front and rear suspension systems were used, supported  in the Testarossa’s case by 255 rear tires on the 10-inch-wide alloy rear wheels, a rudimentary type of traction control.  Most road testers (including yours truly) found the modifications made the car easier to drive than the 512 BB and infinitely easier to drive well than the Lamborghini Countach or most models of the Porsche 911. Where the latter two could jump up and bite the unsuspecting almost without warning, the Testarossa gave plenty of warning signs before its limit was passed.

Despite a lavish cockpit filled with fine carpeting and handsewn leather, the Testarossa was well more than simply a boulevardier. From the outside,  it looked gargantuan for a sports car, but behind the wheel it exhibited the agility of a thoroughbred. Though long-legged, it also performed astonishingly well on Ferrari’s own Fiorano test track, a very tight circuit immediately adjacent to the Ferrari factory in Maranello.

It offered the twin virtues of quickness and speed. From a standing stop 60 miles per hour could arrive in as little as 5 seconds flat, while top speed for an American version was dependably reported as 178-180 mph.

So, while the Testarossa did not offer the true racing pedigree of many of its predecessors, it was still an amazing car in its own right, and it expressed in sheetmetal, steel tubing and aluminum precisely how Ferrari had evolved over the years. By the time the Testarossa was launched in 1984, Ferrari had made the transition from a road racing machine with virtually no allowance for creature comforts to a civilized driving machine with stunning performance credentials. And it still captured the imaginations of auto aficionados the world over.