According to the National Highway Traffic Safety Administration (NHTSA), more than 6,000 teen drivers are killed annually as a result of motor vehicle crashes, and more than half of those fatalities involved a vehicle rollover. As if that is not bad enough, last year more than 325,000 teens were injured in vehicle crashes.

While many have heard these startling statistics, what most Americans have yet to grasp is that safety technology available today can help drivers prevent a large number of those injuries and deaths from occurring. It’s called Electronic Stability Control (ESC), and Continental Teves, one company that designs, builds and supplies ESC systems to auto manufacturers, recently provided drivers education students at Chicago’s Lane Technical High School the opportunity to experience it and other automotive safety technologies for themselves. The bright orange-colored Safely There mobile exhibit gave visitors interactive, multi-media displays, as well as a “test drive” with electronic stability control in a sophisticated, futuristic 3-D simulator ride. 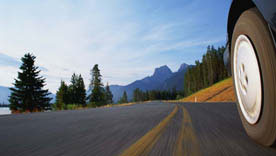 “This is an opportunity for driving students to experience firsthand safety technologies designed to help drivers maintain control in potential crash situations,” said Don McNamara, NHTSA regional administrator for the Chicago area. “Safety technologies that work in conjunction with smart, educated driving behavior is a strong tandem for saving more lives in the future.”

In Europe and Japan, crash-related injuries and deaths are declining much faster than in the U.S., and studies in Germany indicate vehicles equipped with electronic stability control were involved in 30 percent fewer single-vehicle crashes and 15 percent fewer crashes overall. Though electronic stability control technology is currently available in the U.S., only six percent of the vehicles on the road today are equipped with the safety technology.

“Several recent studies in countries where electronic stability control is on significantly more vehicles than in North America have shown if this technology was standard equipment in the U.S., we could potentially save 5,000 to 6,000 lives, tens of thousands of injuries and $35 billion in economic costs annually,” said Continental spokesperson Steven Blow. “The key is to prevent accidents from occurring in the first place and that is what electronic stability control is designed to do.”

A newly published research study by the University of Iowa has concluded that drivers of vehicles equipped with ESC technology increase their ability to maintain control of their vehicles in life threatening situations by 34%. The research study delivered what many called groundbreaking evidence supporting the effectiveness of computer-operated electronic stability control.

The study was commissioned by Robert Bosch Corporation in conjunction with the Electronic Stability Control Coalition and the University of Iowa, and it was implemented by employing the National Advanced Driving Simulator (NADS), which is owned by the National Highway Traffic Safety Administration (NHTSA). During the study, researchers at the University of Iowa were able to study drivers during true-to-life critical driving scenarios that would normally lead to a loss of control.

“This research, the first hi-fidelity simulator-based analysis of driver response to vehicles with and without Electronic Stability Control, significantly changes the automotive safety landscape,” said University of Iowa researcher Yiannis E. Papelis, Ph.D., one of the leading researchers on the study. “Using the National Advanced Driving Simulator allowed us to observe human behavior and measure drivers’ reactions in conditions that would be too dangerous to conduct in real life. Compellingly, the results found ESC can reduce the risk of losing control by as much as 88 percent, which equates to an increase of 34 percent in the number of drivers who maintained control of their vehicles with the ESC system activated.”

Previous international observational studies from Mercedes-Benz and Toyota have shown that ESC could help prevent up to 50 percent of single-vehicle crashes. The University of Iowa’s study compared driver performance during three selected loss-of-control scenarios–lane departure, curve departure and wind gust–between two vehicles equipped with an ESC system and the same vehicles with the system off. Researchers chose the scenarios from the well-known industry accident classifications in the crash avoidance document “44 Crashes.” The results show that vehicles equipped with ESC systems provide a significant safety benefit.

“ESC is a proven active safety technology that can help a driver maintain control of the vehicle and significantly reduces the danger of skidding and rollover accidents,” said Wolfgang Drees, member of the board of management, Robert Bosch GmbH. “The results of this study reflect similar data from international observational studies that ESC does in fact help to save lives.”