Imagine inventing not just a product, but an industry, and then imagine the disappointment of failing to harvest the benefits of your enormous achievement. 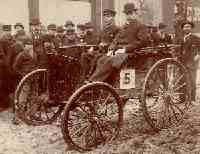 So,  it was with the Duryea brothers, J. Frank and Charles E.  The two brothers were, arguably at least, the first Americans to build a successful automobile, and there is less argument that they were the first to incorporate an American industry for the expressed goal of building automobiles for sale to the public. Further, Frank drove a car they planned and built to victory in the first automobile race ever held in America. Yet, when all is said and done, the two brothers are but an vague footnote in the history of the auto industry they created.

Though, if the Duryeas are a footnote,  it is certainly a widely colorful, varied,  and, ultimately tragic footnote. The brothers hailed from the Midwest and like two other famous inventor brothers, Wilbur and Orville Wright, they became intimately involved in the burgeoning bicycle business, one of the greatest “growth sectors” of the 1880s and 1890s. While living in Peoria, Illinois, Charles designed an improved bicycle he dubbed the Sylph, and business took the brothers to Springfield, Massachusetts, to begin mass production.

Charles, though, had other interests in addition to bicycles and one of them was a concept for an engine-powered carriage. Some say the idea was set off when he read an article about Karl Benz’ work in an issue of Scientific American. Others hint that the magazine article simply reinforced an idea Charles had already begun to develop. In any case, by the early 1890s, both Frank and Charles were in Massachusetts, and Charles invited his brother to join him in the pursuit of building a workable motor car. Frank, a machinist by trade, readuly jumped into the task, and he continued to work on the task when Charles returned to Peoria in September 1892 to oversee production of one of his bicycle designs at the Rouse, Hazard company.

A year later, after a great deal of altering, Frank Duryea was ready to test the brothers’ motor wagon.  On September 20, 1893, the test run took place on the outskirts of Springfield, Massachusetts. On hand were Howard Bemis, who owned the farm on which the test began, Erwin Markham, an investor in the project,  and Rudy MacPhee, a reporter for the Springfield Evening-Union. Though Duryea wasn’t confident enough in his machine to stage his first drive in downtown Springfield, he apparently was confident enough to have a reporter on hand to chronicle what transpired.  And what happened was memorable,  if brief. With Duryea at the tiller, the three other men pushed the carriage until the motor sputtered into operation. Then the vehicle was in motion under its own power for about 200 feet until a pile of dirt in its path halted its progress.

In retrospect, there was nothing earth-shattering regarding the vehicle’s design. In fact, calling it unrefined might be giving it a compliment. The automobile was basically a four-wheeled carriage whose large-diameter rear wheels were driven by a single-cylinder gasoline-fueled engine mounted horizontally under the carriage body. The water-cooled engine used “make-or-break” ignition and supplied what has been variously described as 3.5 or 4 horsepower. Friction drive transferred the power to the wheels, so it is not startling that its top speed was estimated as 7.5 miles per hour.

That first drive got the Duryeas some advertising, but Frank didn’t believe the first car was ready to take to market, and, unlike some other early automotive builders, going to market was precisely what the Duryeas had in mind. With his brother still in Illinois, Frank continued to alter with the design and, by 1895, he had assembled a car that he considered much superior to the original.

Luckily, Frank soon got the chance to show off his handiwork. At the same time the Duryeas were toying with the idea of a horseless carriage, a Chicago newspaper publisher named Herman H. Kohlsaat became taken with  the idea of staging an automobile race after reading about the 1894 road race between Rouen an Paris  that had been sponsored by the French paper Le Petit Journal. He decided that his newspaper, the Chicago Times-Herald, would champion a similar race, but over a decidedly less romantic route. The initial American automobile contest was run over a 54-mile course that extended from Chicago’s Jackson Park to Evanston and back. Undoubtedly, it was a challenging route for vehicles that topped out at seven-and-a-half miles per hour, but the joker in the deck was that it was opposed on Thanksgiving Day, immediately following a snowstorm. Amazingly,  on November 28, 1895,  six vehicles emerged at the starting line: three cars built by the Benz works and imported from Germany, two electric vehicles drawing their power from batteries, and Frank Duryea’s new car. It was better than his first version in practically every way, but the biggest improvement was a significantly more powerful two-cylinder engine.

The race, challenged in frigid temperatures in open cars, became an endurance race, but when the first car crossed the finish line seven hours and 53 minutes later, it was piloted by none other than Frank Duryea. Besting the Benz models, built by a company that had been manufacturing motorwagens since 1886, was an incredible  accomplishment  for the Duryeas, and it wasn’t lost on the American public, who were eager to claim automotive leadership for the glorious red, white and blue.

The formation of the first American company formed for the objective of building automobiles actually pre-dated the Chicago race by a couple of months. The Duryea Motor Wagon Company, with headquarters in Springfield, Massachusetts, was formally organized in September 1895, but the success in the first American race gave the new concern significantly more momentum.

The new company built 13 nearly duplicate 1896 model Duryea Motor Wagons the following year in its Springfield shops. As modest as this looks, it marked the beginning of the American automobile industry. At the same time, in the winter of 1896, Charles Duryea took the Chicago race-winning car to Peoria in an attempt to interest investors in establishing a manufacturing operation there. While that unsuccessful foray seems ill-advised and redundant  today, Charles was simply applying the standard practice of the bicycle industry, which was littered with regional producers, to the infant auto business.

While Charles was failing to gather any headway in the Midwest, the Duryeas had much better triumph in the East. On Memorial Day 1896, Frank was victorious in the Cosmopolitan Race held in New York City, while Charles ended second, both men in series-built 1896 Duryeas. A third Duryea in the race was involved in the first documented American automobile accident, and its driver was arrested and thrown into jail.

Later that year,  Charles inexplicably decided to transfer his family to New Jersey to work for a firm called the Canda Company. Almost simultaneously, Frank took a trip to England where he won the first Brighton to London “run” by more than an hour, much to the consternation of the British. Frank was awarded a medal commemorating his “prompt arrival” for his efforts.

Sadly, despite all this seeming momentum, 1896  showed to be the high-water mark for the Duryeas. Charles and Frank  began to argue about the direction of their fledgling Massachusetts operation, and in 1898 they sold their interest in the company, which immediately was absorbed by the National Motor Carriage Company. Later that same year, Charles moved back to Peoria and was again absorbed on getting an automobile manufacturing operation started there. The Duryea Manufacturing Company was incorporated for that objective in 1898 with some of the funds apparently coming from his sale of shares in the Duryea Motor Wagon Company.

By July 1898, Charles Duryea was proudly flaunting a prototype of his firm’s vehicle, called the Duryea Motor Trap. Equipped with a three-cylinder engine, the Charles Duryea outline was somewhat advanced over previous Duryea versions. The only trouble was getting real production to start.

Under-capitalized, the Duryea Manufacturing Company contracted with one more local company named the Peoria Rubber and Manufacturing Company to build Duryea automobiles.  But Peoria Rubber soon found itself  fascinated by the “BicycleTrust,” and serious production of cars was sporadic at best. An approximated production run of 100 for 1899 ended up at 15 or so. By the beginning of 1900, Charles had had enough of Peoria, and he transferred to Reading, Pennsylvania, where a few more Duryeas of his design were manufactured.

In the meantime, his estranged brother Frank was busy nearby. In 1901, he made an agreement with the Massachusetts-based J. Stevens Arms and Tool Company to build automobiles and in 1904 the Stevens-Duryea Company was formed to produce Stevens-Duryea automobiles in factories in Chicopee and East Springfield.   Initially, that company had moderate success, but it closed its doors in 1915 having built about 14,000 vehicles.

When his Reading operation went sour, Charles Duryea  produced some cars in Saginaw, Michigan. After that, he transferred yet again, this time to Philadelphia, the fire still burning inside to become a mover-and-shaker in the industry he developed. Well before he passed away in 1938 he lamented, “Children growing up today will think that Henry Ford invented the automobile.” A sad ending for the brothers who created the American auto business.