It might be difficult to imagine now, more than 30 years later, but in 1972, a French-designed 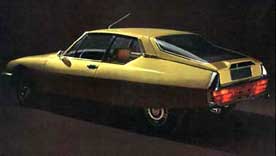 and built automobile was extensively regarded as the best car in the world.  If one discounts the Panhard et Levassor models of the early 1900s, this might be the one and only time a French car was acknowledged as the best on the globe, and that is unsurprising since French cars usually enjoy the same esteem granted to Mexican banking practices and Scottish cuisine.  How did the planets sided in favor of the Citroen SM?  Well, that is an interesting story indeed.

It starts with a man named Andre Citroen, the son of a Dutch diamond broker.  Born in 1878 into an upper middle class home, he attended technical college and, studious on new techniques, he garnered a license for a Russian process of machining gear teeth.  Citroen’s gears quickly gained a reputation for silence and strength, and his business became so successful a prominent French automobile manufacturer Mors asked him for technical assistance.

A mid-World War I visit to the gigantic Ford River Rouge plant moved Citroen to propose a post-war partnership with Henry Ford to create cars in France. But Ford did not approve, so Citroen decided to out-Ford Ford at

least on the Continent. He partnered with Jules Salemon and together they began building cars in what had been the artillery shell factory on the Quai de Javel in Paris. Given Citroen’s aspirations, it is not surprising that the enterprise’s first car was a small “people’s car.” Called the A Model, the car had a 1.3-liter engine that produced just 10 horsepower.

By aiming low, the first Citroen was a success in the marketplace and the double chevrons that represented Citroen’s gear-making venture became an ordinary  sight in France. The A Model was succeeded by the 5CV “Trefle” and it, too, was a hit in the marketplace.

From Arctic to desert

Not only did Citroen build low cost but reliable cars, Citroen also had a gift for promotion. A 1925 publicity feat saw the Citroen name in lights on the Eiffel tower, but public endurance tests were his trademark.  His C4 version was treated to a drive through the Canadian Arctic, but that was nothing compared to the B2, which was fitted with tank tracks rather than  rear wheels and driven across the Sahara desert.

Through the Twenties, Citroen, man and company, were on a roll, but the Depression following the 1929 stock market crash proved overwhelming to both.  Sales took a huge plunge, and Citroen was forced to turn to one of his main suppliers, Michelin, for help. Before the Thirties were finished, Michelin would acquire 60 percent of Citroen.

Andre Citroen passed away  in 1935 passing the baton to Pierre Boulanger, who found post World War II success with the Citroen 2CV, the fabled and much-maligned Deaux Chevaux.  The 2CV was actually expanded in the Thirties but the Second World War and post-war chaos conspired to prevent the car from reaching serious production until 1948.

The 2CV and the continued triumph of the Citroen 11 Traction Avant finally landed the company on a solid footing in the Fifties.  Always willing to march to its own beat, Citroen then amazed and shocked  the auto world with the introduction of its DS sedans in 1955. These spaceship-inspired cars used an astounding  complex hydraulic system to power steering, gear changes, brakes, and suspension.

With the ever-ready 2CV supporting the company from the bottom of the market and the DS giving middle-echelon clients something distinct  to spend their money on, Citroen posted decent results for its parent, Michelin, into the Sixties.  But there,  sadly,  the company came a cropper again.

President Pierre Bercot inexplicably made a decision to go on a merger-and-acquisition spree that netted the company Panhard, Berliet, and Maserati.  None of these acquisitions was a particularly good business decision, but gaining control of Maserati did have a positive advantage as far the as SM goes, because Maserati would eventually donate the engine to this esteemed automobile.

However, that is a bit  ahead of the story.  The SM resulted from a seemingly endless stream of  improvement cars intended to prove to the world at large that performance and front-wheel-drive were not oxymoronic.  Andre Lefebvre, who designed the Traction Avant, was the original leader of this charge, and by the time it was through,  respected engineers Walter Becchia and  Jacques Ne  also contributed to the project.

After the acquisition of Maserati, though, Bercot decided to turn his back on Becchia’s  numerouss engine designs and look to the Italian company for a powerplant.  Giulio Alfieri,  Maserati’s chief engineer,  fulfilled the assignment by building  a small, reasonably light V-6 that could be wedged into the SM’s confined engine bay.

When it came to the production vehicle, though, the hastily improved  Maserati powerplant wasn’t all that wonderful.  Oh, it was small and tough, supplying about 180 horsepower at a busy 6250 rpm, but because it was a 90-degree design rather than the preferred 60-degree configuration, it was a rattler.  Of course, power was routed to the front wheels via a front-mounted 5-speed manual or 3-speed automatic transmission.

As you might conceive, the SM had many other similarities to the DS as well.  For instance, the vehicle used the well-known Citroen high-pressure hydraulic system to provide both springing and shock-damping functions.  Fabulous when it wasn’t leaking, the system also offered  adjustable ride height and self-leveling functions.  Many SM drivers, in fact,  would raise their cars to the highest ride height to Ford (you should pardon the expression) puddles.

Brakes also were controlled by the central hydraulics.  As in the DS, the front disc brakes were attached inboard, which was strange enough, but the strangest part of the braking system was the mushroom-shaped bulb that took the place of the brake pedal.  Foot pressure on this key activated the brakes.  The more foot pressure applied, the greater the braking movemet with front-rear bias adjusted by a proportioning valve.

Apparently, steering was as strange as the braking.  The steering rack varied steering boost in accordance with the vehicle speed, which is relatively common these days, but uncommon was the SM’s strong self-centering action and its super-quick two turns lock-to-lock.  Because of this, driving the SM took a learning curve that most often resulted in early uneasiness at the wheel.

Exterior styling also yield a strong kinship to the DS  models, but the cars were penned by different designers.  Flaminio Bertoni is credited with the DS, but he had the misfortune to die before the completion of the SM project, so Robert Opron took the leads. He drew up a car that was obviously a Citroen, but at the same time different than the DS if no less weird.

The 1970 Geneva Show was the place of revealing  the SM, and it took the automotive world by storm almost before anyone could drive one.  When magazine test drivers finally did get to test it, they immediately loved the car, for all its oddities.  As we said in the opening paragraph, it was broadly proclaimed to be the greatest car in the world.  Motor Trend magazine  awarded  the newly introduced American version its “Car of the Year” for 1972.

But the seeds of  calamity were already flying through the air like pollen in Kansas on a hot August day.  Amazing as the car was technically it was just as complex to maintain  running properly.  Similar to the Cord 810, a vehicle with which the SM had more than one similarity, the French car got a reputation as temperamental.  Then the 1973-74 oil crisis hit, and even though the SM could attain twenty miles per gallon, the turn from performance cars  swiftly made the SM a has-been.  In the end,  only  2,000 or so SMs made it to the United States, an unfortunate conclusion for what for a brief time at least was a shining French star.

Tagged with: Citroen • Ford • top down