Car Consumers Are Being Watched

If you have ever bought a new car–or if you plan to in the future–you are being scrutinized. Car makers want to know how you think, where you live and, most of all, what you are likely to buy. They want to gauge the upcoming trends or at least catch the wave of current ones, and to do that they have to know what you’re thinking. There’s nothing really sinister about it, because all they really want is to learn what vehicles you’re going to want in future months so they can plan their production accordingly. Still some consumers might be uncomfortable with the extent that car manufacturers will go to learn about their lifestyles.

And the degree of consumer research just got a little deeper. In days of yore, namely six months ago, car manufacturers had to wait until their new vehicles hit the market to get a firm handle on not only how they were selling, but, equally important, who was buying them. Now, though, a new monthly automotive omnibus study from Harris Interactive and Kelley Blue Book called AutoVIBES provides shopper profiles for vehicles before the first one is ever sold. This can be invaluable to car manufacturers because it gives them an early read on how and where they should be advertising before the first of a new model line even hits the showrooms. The result can save millions of dollars in otherwise misplaced advertising expenditures.

The new study tracks car shoppers’ awareness, “favorability” (whether they like them or not), and buying intentions of new vehicles before they hit the marketplace. The detailed demographic information is collected on the Kelley Blue Book (kbb.com) Web site from 1,500-2,000 consumers who say they plan to buy a new vehicle in the following six months. Harris Interactive and Kelley Blue Book marketing research jointly analyze the data to create “profiles” of shoppers of each new vehicle. The data is “trended” beginning several months before a vehicle is sold and tracked all the way through its consumer introduction and sale. 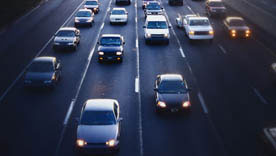 Early results of the study indicate that many manufacturers should tune up their crystal balls, because the consumers they are targeting for various models are far different from those who are actually expressing strong interest in buying the vehicles. For example, the new, Korean-made Chevrolet Aveo has been touted as GM’s answer to the youth or “entry-level” market, twenty-somethings who are buying their first new car. But while Chevy has gone to a hip, Gen X-Gen Y ad campaign for the Aveo, the AutoVIBES study indicates a full 41 percent of those considering the car are age 45 or older.

A similar phenomenon exists with Scion, Toyota’s new youth market brand that is the most aggressive in courting Gen Y buyers. In fact, a Scion TV ad could easily be confused for a spot touting skateboards or soda pop. Despite the marketing slant that is skewed heavily toward college kids and young singles, however, more than 40 percent of those who have expressed interest in buying the Scion xA are 45 or older. And though Scion also has made an attempt to be unisex, xA intenders are predominantly (75 percent) male.

Nissan is running into almost the opposite case with its new, beefy Pathfinder Armada sport utility vehicle. Based largely on the macho Nissan Titan full-size pickup truck, the vehicle might be expected to grab a similar male-oriented group. But the study shows that more than half (52 percent) of prospective Armada buyers are women.

Finally, there is the virtually inexplicable. Ford has recently introduced its new Freestar minivan, designed from the ground up to put it in the ballpark with the segment-leading Chrysler and Honda family haulers. But how do you figure this? Some 44 percent of those considering a Freestar don’t have kids under the age of 18 living with them. Why these folks want a minivan is a mystery deeper than who killed Dickie Greenleaf.

What this shows, yet again, is that automotive consumers are fickle, hard-to-read and borderline irrational, which, we guess, is what one should really expect. After all, they’re people like us, aren’t they?

—Contributor Tom Ripley studies the automotive scene and the human condition from his home in Villeperce, France. © Studio One Networks