Are You Cool With School Carpool? 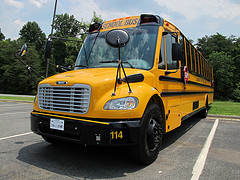 School has moms and dads driving their kids–and neighbor kids–to school in record numbers. Now a new national survey sponsored by Nissan North America, indicates that many parents are extremely concerned about their children’s safety, especially in other parents’ vehicles.

According to a survey of consumers conducted by StrategyOne, a national public opinion research company, nearly seven out of 10 (69 percent) mothers  are “very  or extremely concerned” about their children’s safety when they carpool with other parents. Their first concern (84 percent) is that their children will not be properly restrained when in other parents’ vehicles. Following close behind, 81 percent of moms said they are worried that being in a hurry to get to their destination compromises their children’s safety.

The survey also found that four out of five mothers (79 percent) find children’s behavior to be the biggest distraction while driving. Cellular phones ranked second, with 75 percent of moms citing them as a distraction.

“Mothers are worried about their children when they’re on the road with others, and they are right to be concerned–2,570 children under the age of 15 were killed last year in automobile accidents,” said Bob Yakushi, Nissan’s director of product safety, regulatory, accessory quality, and a certified child passenger safety technician. “It can be difficult driving with children in the car, but moms can help maximize the safety of everyone in the vehicle by following five simple tips, and sharing these tips with other moms.”

Fasten Seatbelts Before Takeoff. Check each child’s safety seat and belt to ensure they are properly restrained before starting the car.

Music Calms the Savage Beast. About two thirds of mothers rely on music (68 percent) or toys (66 percent) to occupy their children’s attention so that they can focus on driving. Keep soft toys and games in the car to entertain your children or get them to sing along to their favorite music.

No Good Deed Goes Unnoticed. Reinforce good behavior with prizes, such as an extra book from the library, or quarters for the video arcade.

A Time and Place for Everything. Pull the vehicle over at a safe place–never on the side of the road–to deal with behavior problems. Don’t try to solve situations while driving.

Look Mom, No Hands. Do not use the cell phone when driving, or, if it is really necessary, use a hands-free headset, pull off the road, and make it very brief.